I was focusing on learning how to do a masking around the egg, and doing a colored wash background.

This was my first watercolor painting with “real” paints and brushes, and it’s much more fun with better paints. The pigment is can be stretched much further, and layering effects work out in an interesting way.

I’ve been on a watercolor kick for the last 1-2 months, and I think I’m actually starting to understand how to pigment behaves, and I’m starting to enjoy myself.

This was my first ambitious watercolor project, I think I spent ~10 hours on it total.

Spent some time this evening sketch doodling in Procreate. I ended up making a liquified comet / asteroid thing.

At the end of march I returned full-time to working at Planet due to all of the uncertainty caused by the COVID19 pandemic. Overnight I went from using video chat once every 2-3 months to multiple times a day.

I hadn’t done much painting in the last few months, and I wanted something simple to put up on my wall behind me, as my zoom video conference background. I had a few 6×6″ thick canvases that were stashed away waiting to be painted.

In my office I have a dual workspace. One desk for working+gaming, and another desk for art (where I can splatter paint and get messy). My webcam for video conferences faces my messy desk (which isn’t actually that messy… just artsy!). So I had the thought that it might be cool to fill my background with vibrant colorful art, which would serve the dual purpose of having a cool background for video calls, and some bright inspiration to have in my workspace. I spend like 8-12hr/day in that room, so might as well make it artsy/nice.

To get my art wall started, I decided to paint a paint 4 6×6″ canvases with simple color schemes that make me happy.

I remembered Gal Shir’s old medium post about the creation of ColorHunt, and how he spec’d out what the sizes/percentages were for color bars on ColorHunt, and I decided to give that a shot. Here’s a photo that he shared in his medium post that inspired my idea.

I browsed through colorhunt to find a few color palettes that made me happy, and came up with a quick mockup like this:

Then I started painting! Below are the photos that I took along the way. I still haven’t taken the time to hang them on the wall, but I’m super happy with how they turned out.

A few months ago I went on a multi-night binge spree of watching Adam Savage’s One Day Builds. If you haven’t watched them, I highly recommend setting aside a few hours and watching 2-5 of them at 2x speed, it’s sooooo satisfying!

What I mean by “sketch with physical objects” is that there’s a creative process happening, and instead of drawing something out on paper, it starts to take form as you slowly assemble the physical pieces. To me, that feels a lot like sketching on the iPad or on paper. It’s the same mindset, the same feeling, with a different medium — and to me, that’s super cool!

Shortly after this binge spree, I went to an art store in Denver. This particular art store is my favorite because it’s massive and they have a huge selection of paints as well as printmaking stuff. It’s a super cool store, it kind of reminds of the Flax art supply store that used to live on Market Street in San Francisco.

As I was slowly browsing the shop, I found some super cheap sheets of basswood, and I suddenly had an idea!

During that time I was drawing super frequently on the iPad with Procreate, but I was having a hard time positioning the iPad at the perfect angle for drawing — so I was kind of constantly uncomfortable. The closest thing to perfection was when I put my phone underneath the iPad, which created a ~45º angle, which felt perfect.

So I channeled my inner Adam Savage, and decided that I was going to buy some of this basswood, and make a little stand that propped up the iPad at the perfect angle. I had no idea how to do what I wanted, but I was excited to dive in.

Below are photos I took throughout the build that kind of demonstrate my thinking.

It’s not perfect, but it is exactly what I wanted. I learned how to work with a new material (basswood), and I also learned that it warps in weird ways when you blast it with a heat gun to dry paint because you’re impatient 😬

Any day that you build a new tool that fits the task at hand is a good day.

NOTE: I originally wrote this in February 2020, and forgot to post it. Oops!

My primary hobby for the last few months has been making art. Most of my time so far has been spent on learning how to paint with acrylics from scratch (wrote a post about getting started).

Since finishing my last painting, I started looking for new ways to make art. One area that’s kind of always fascinated me is animation. It’s always been interesting to me that you could dream up a world, and create enough of a story and technical drawing skill to share that world with others. From nothing to unlimited possibilities.

So I started trying to digging into some books. Early in my journey, it became clear that if I wanted to animate, I was going to actually need to learn how to draw. Drawing is a skill I’ve always wanted to have, but it’s a hard skill to attain — I’ve always had trouble keeping a routine practice schedule, which meant I never actually learned.

In the last few months, I’ve naturally built some drawing skills, just by learning how to paint and creating visual things with my hands vs. a keyboard and mouse. So while I’ve always had a hard time learning to draw, my recent experience has made it easier to develop a more routine practice schedule. Part of that is that I plan to stream me learning to draw on twitch. To start I’m going to try streaming for a few hours one evening a week. If I want to share more I might jump on randomly, but I think committing to a specific time will help me stay consistent.

I was inspired to try streaming after I watched Nicholas Kole stream the making of this: https://www.instagram.com/p/B89kDtxHfU4. It was such a cool experience to watch a great artist think and develop the overall style of the piece from very basic to very detailed.

I’ve always wanted to try streaming, but I’ve really never known how to get started. It turns out I already had most of the hardware needed for streaming, I just needed to get a few software tools to set things up. So I spent a bunch of time digging into StreamLabs and OBS to create the visual look and feel of the stream. I did a quick 20min long test stream of me playing with IORama Looom (an interesting animation app that tries to feel more like a musical instrument than a drawing app). I didn’t get any viewers, but I had a blast setting up all of the software.

My goal was to be able to stream Procreate from my iPad to twitch with low latency and also thought it’d be fun to set up a stream with chat, webcam video, and stream alerts like all of the other streamers I watch.

This evening I spent some time playing with Adobe Fresco. It feels very similar to Procreate in many ways, but there are some interesting features.

Most notable are the Oil and Watercolor “Live Brushes”. These brushes try to make the digital painting feel more like the actual medium of paint. It uses the stylus’ motion and pressure to make something that feels “real”.

I thought watercolors felt very interesting, and I managed to make something cool in about an hour and a half.

Sketching with motion in Looom

Just some sketching in procreate. 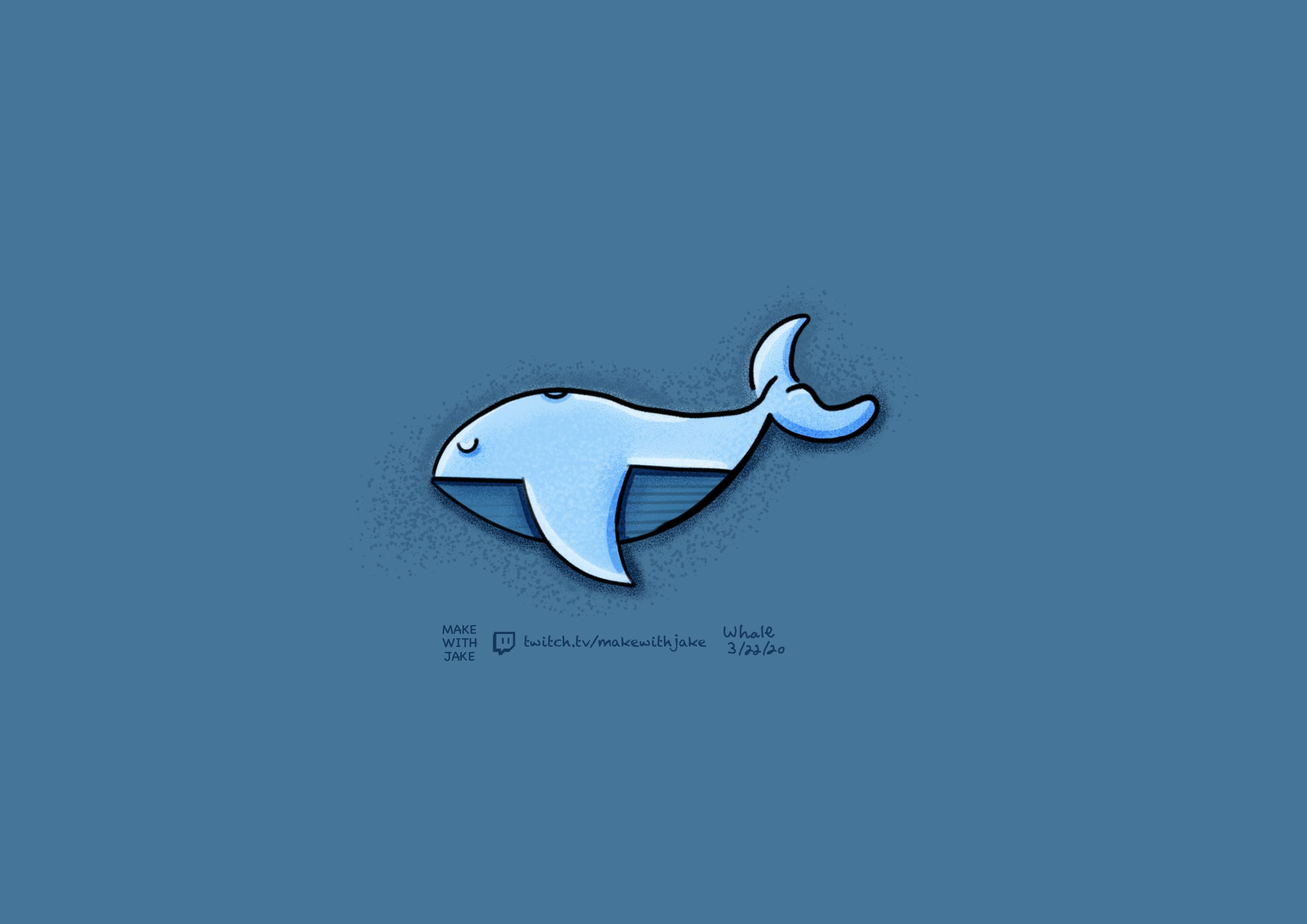 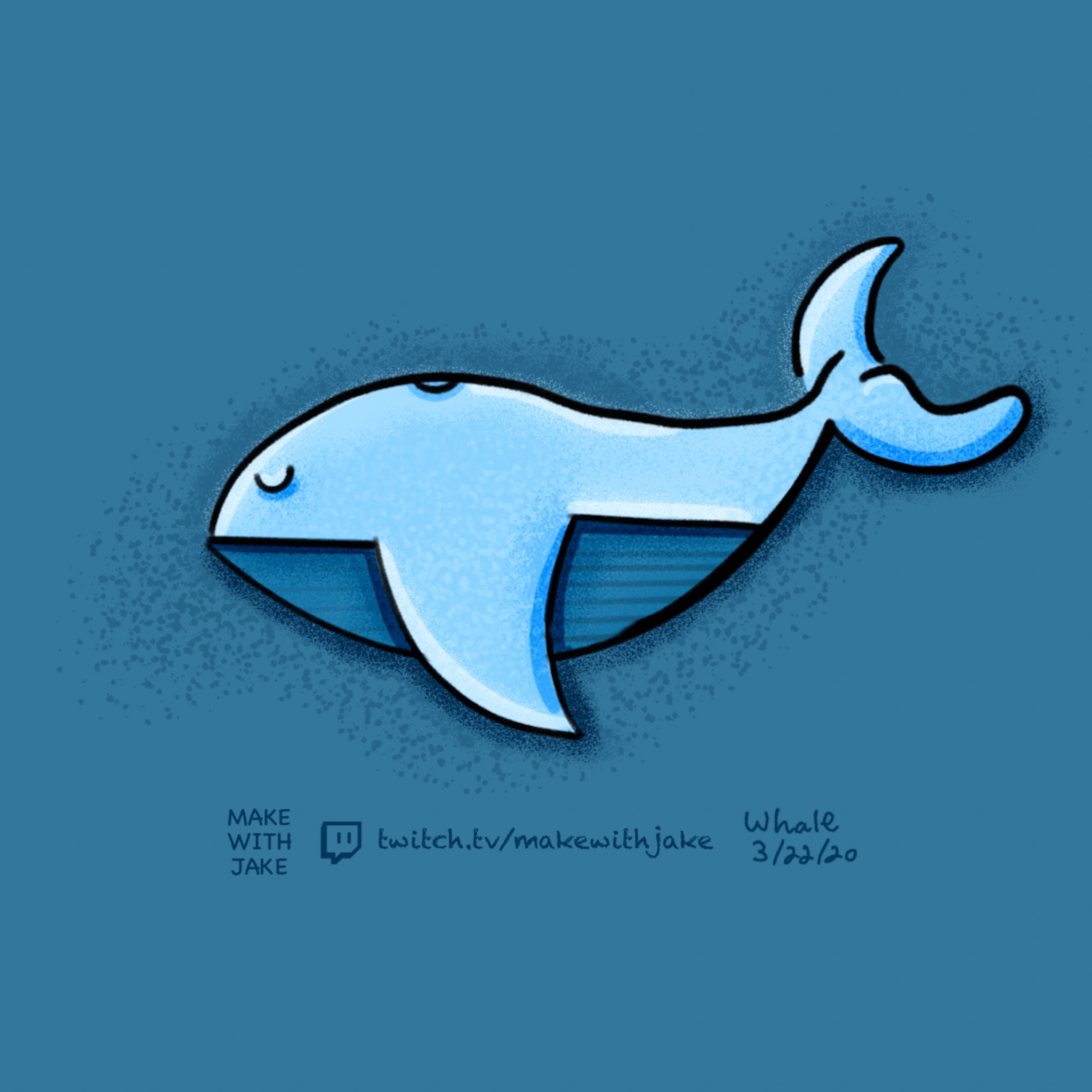